Top researchers and zoological institutions work hand in hand to develop advanced technologies for assisted reproduction. These methods are the last straw for highly endangered species such as the Northern White Rhino.

In 1962, the International Union for Conservation of Nature and Natural Resources (IUCN) published the first Red List of Threatened Species, at that time still in book form, entitled "Red Data Book". Thirty years later, the classification of endangered status, which is still used today, was introduced. It ranges from "LC" (least concern) to "EX" (extinct) and is the determining criterion for the choice of measures for the protection of the respective species. While traditional approaches such as habitat protection or breeding programmes are the means of choice for the statuses "VU" (vulnerable) and "EN" (endangered), this is often no longer sufficient for species threatened by acute extinction ("CR" - critically endangered). In such cases, specialised intervention programmes in cooperation between conservation research and zoological institutions are the last hope of preventing extinction.

For the Northern White Rhino, an additional category on the Red List could actually be introduced. The last step before extinction there is "EW" (extinct in the wild). This groups those species that no longer exist in the wild and have only survived under human care. But today the situation of the charismatic pachyderms is even more dramatic: Only two specimens still exist worldwide, both are females, mother Najin and daughter Fatu. In 2009, they came to the Ol Pejeta Reserve in Kenya together with two males from the Czech Zoo Dvůr Králové to take advantage of their last chance for natural reproduction, stimulated by the equatorial sun. This attempt failed, with one male dying in 2014 and the other in 2018. It is completely impossible for the Northern White Rhino to survive on its own.

But there is still a chance, a last straw still exists for Najin and Fatu. In August and December 2019, a team of scientists lead by Thomas Hildebrandt from the Berlin-based Leibniz Institute for Zoo and Wildlife Research (Leibniz-IZW) retrieved eggs from the two animals, which were then fertilised in the laboratory with previously frozen sperm from already deceased bulls. The embryos produced will be transferred to surrogate mothers – southern white rhinos – to give birth to a northern white rhino. Each of these steps is new territory for conservation and pushes the boundaries of what is thinkable and feasible. 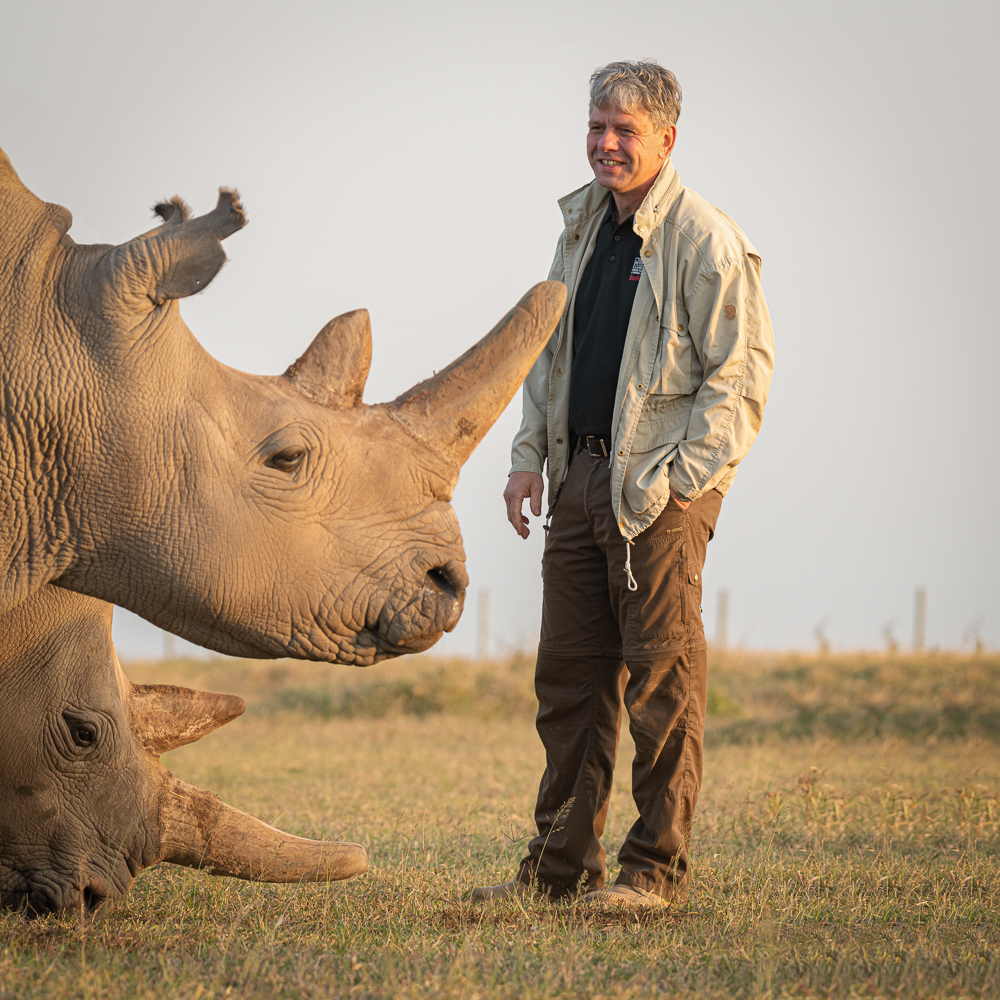 Head of the team is Prof. Thomas Hildebrandt from the Leibniz Institute for Zoo and Wildlife Research in Berlin. "We humans are directly responsible for almost all cases of extinction of animal species, therefore I see it as our duty to try everything humanly possible to save one or another species after all". Everything humanly possible, in this case are advanced methods of assisted reproduction: Hildebrandt and his team have developed and refined methods, technologies and devices over the years, such as the patented device for retrieving eggs from the ovaries of rhinoceros females. Since 2019, the BioRescue consortium has been funded by the German Federal Ministry of Education and Research to make reaching for the last straw a success.

An important part of Hildebrandt's work with BioRescue is basic research in cooperation with zoological institutions. Southern White Rhinos also have reproductive problems, so that basic research for these complicated methods and techniques can be carried out as a win-win situation for Southern and Northern White Rhinos. Cooperation with zoological institutions is essential for this: it ensures that procedures are refined and optimized for years before they are used on Najin and Fatu. For the first two steps of this Ascension Commando of species conservation - the Washington Post recently called the BioRescue team "the Navy SEALs of veterinarians" and their mission as an "hail mary pass" - this cooperation has already been crowned with success. In February 2017, the BioRescue partners succeeded for the first time in creating rhino embryos in the laboratory by in vitro fertilization using the ICSI (intracytoplasmic sperm injection) method.

But the next challenges are not far away and once again Hildebrandt must succeed in something that no one before him has ever done before: the transfer of a rhinoceros embryo created in the laboratory into a surrogate mother. "Here, too, our top-level research would be impossible without cooperation with zoological institutions such as the zoos in Dvůr Králové, Chrorzow, Schwerin, Salzburg, Parc Pairi Daiza, Budapest, Longleat Safari, Montpellier, Zlin or the Serengetipark Hodenhagen," Hildebrandt said. "Where it is medically necessary, we already carry out embryo transfers there, unfortunately without success so far. But we will not relent, because this is the only way to prevent Najin and Fatu from being the last of their kind. In two to three years, according to Hildebrandt's best case scenario, the audacious plan could come to fruition and a true northern white rhino could be born for the first time since 2000. To achieve this, the IUCN would then have to invent another status: "CD" - to cheat death.