In order to prevent the extinction of species such as the northern white rhino, the BioRescue consortium is developing new methods and technologies for conservation. An important part of this work is basic research in cooperation with zoological institutions. This partnership has enabled the BioRescue team to continue working even during the Corona pandemic. On May 26, 2020, the team extracted oocytes from the southern white rhino female "Makena" in Serengeti Park in Hodenhagen, Germany, and then fertilized them in the Avantea laboratory in Italy to create four viable embryos. This was the team's most successful procedure of its kind and nourishes the hope that advanced assisted reproduction technologies (aART) are well established to ensure the survival of the northern white rhino in the near future. 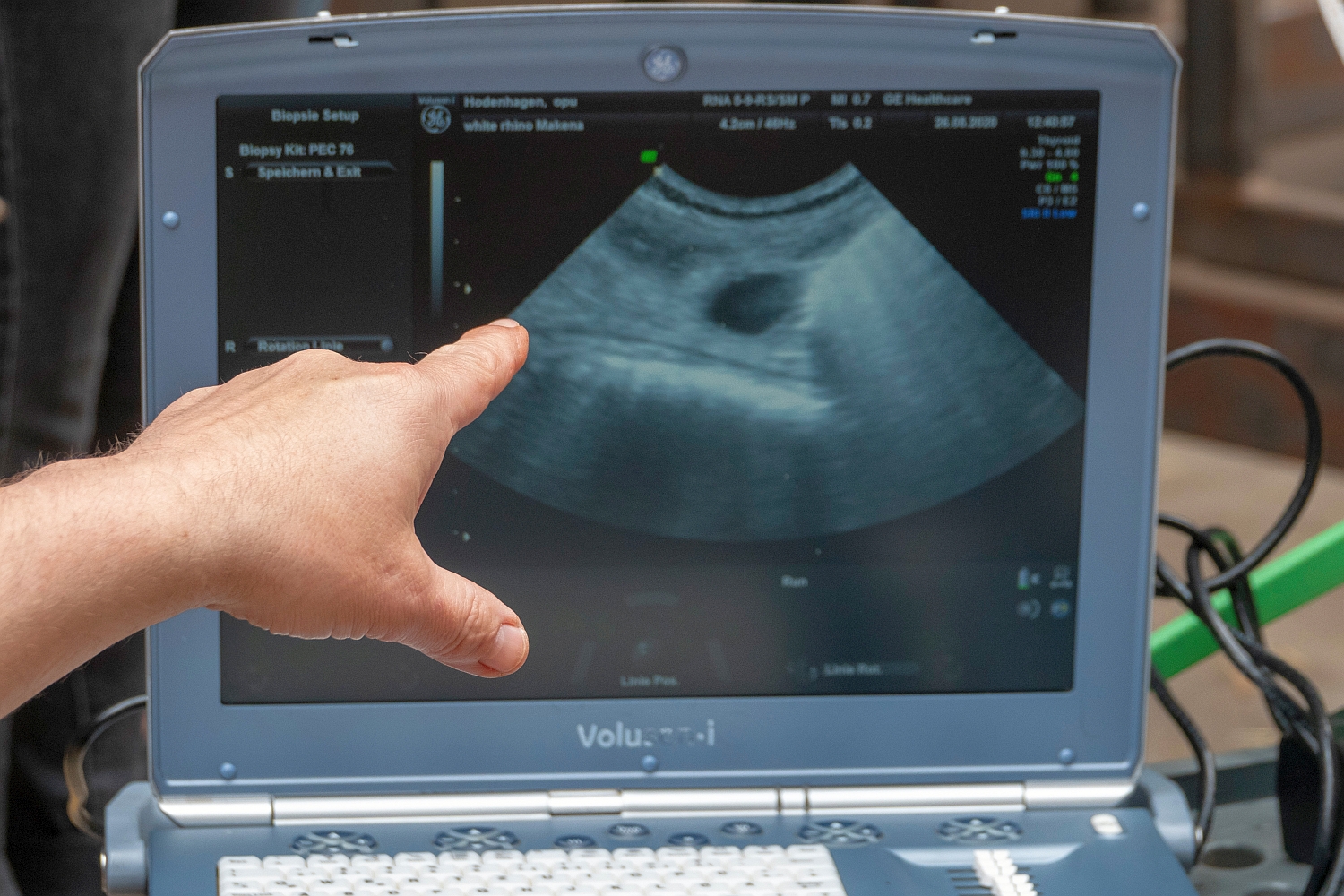 Problems with natural reproduction are often a major factor in the decline of wildlife populations, both in the wild and in human care. Therefore, techniques and methods of assisted reproduction are of crucial importance for science-based conservation. The northern white rhino is no longer able to survive on its own as a species since both remaining individuals are females. In order to perpetuate the species’ existence, immature egg cells (oocytes) were collected from them in the past, which were then fertilised in the laboratory with thawed sperm collected from already deceased bulls and kept frozen. These embryos will be transferred at some stage to southern white rhino surrogate mothers and could ensure the birth of a northern white rhino calf.

Southern white rhinos in European zoos also have reproduction problems. Basic research for complex assisted reproduction technologies can therefore be carried out as a win-win situation for southern and northern white rhinos. To achieve this, cooperation with zoological institutions is an essential component of the BioRescue Consortium. On 26 May 2020, Prof. Dr. Hildebrandt , the leader of this Consortium, and his team extracted 12 oocytes from the seven-year-old southern white rhino female “Makena” in the Serengeti Park in Hodenhagen, Germany. This was made possible because a suitable partner for Makena could not be transported to the zoo because of the corona pandemic. Subsequently, the extracted occytes were matured in the Avantea laboratory in Italy and seven of them were successfully fertilised with sperm from a southern rhino bull from Salzburg Zoo. Four embryos developed, which are now preserved in liquid nitrogen. This is BioRescue’s most successful egg collection and embryo creation in white rhinos so far.

The Leibniz-IZW team with Makena at the Serengeti Park Hodenhagen. | Photo by Anne Ipsen

Owing to restrictions on international travel, the BioRescue team had to postpone a procedure in Kenya planned for May. It will be rescheduled as soon as circumstances permit. BioRescue is an international consortium of research institutions, zoological gardens and conservation organisations. Its goal is to develop advanced assisted reproduction technologies (aART) and stem cell-associated techniques (SCAT), and to apply them as new science-based interventions for conservation. The consortium is led by Prof. Dr. Thomas Hildebrandt, head of the Department of Reproduction Management at Leibniz-IZW. Further consortium partners are the Max Delbrück Center for Molecular Medicine (MDC), the AVANTEA Laboratory of Reproductive Technologies, the Safari Park Dvůr Králové, the Universita degli studi di Padua and Kyushu University. BioRescue is funded by the German Federal Ministry of Education and Research (BMBF).

Quotes
Description
We are glad that we could restart with BioRescue project after the COVID-19 lockdown. We have found a very competent partner in the Serengeti Park Hodenhagen, so that we achieved our best result collection and embryo production ever. Based on this outcome our optimism regarding a successful rescue of the practically extinct northern white rhinoceros has improved significantly.
Name
— Prof. Dr. Thomas Hildebrandt
Position
BioRescue project leader and Head of the Department of Reproduction Management, Leibniz-IZW
Description
Conservation is a central task for us. In 1996 our bull Kai in Namibia was the first European-born white rhino in the world to be released into the wild. Giving something back to nature was also a very moving moment for me personally. In this context I am even prouder today that we can make a valuable contribution to the BioRescue project with our Makena. I am confident that with our joint efforts we can secure a long-term future for many species on this planet!
Name
— Dr. Fabrizio Sepe
Position
Owner and Managing Director of Serengeti Park Hodenhagen
Description
We are pleased that international activities have resumed after the pandemic and we were able to store additional embryos that will be crucial to achieve our main milestone now i.e. the establishment of a pregnancy after the transfer of a frozen embryo. This will be crucial when we come to transfer the few and precious NWR embryos that we have produced so far and will be producing in the future. The laboratory procedures are now well established, reproducible. To achieve this milestone, we will need the support of the rhino community as we do not know how long it will take to master this final aspect of the technology.
Name
— Prof. Cesare Galli
Position
Head of Avantea
Description
All the methods and protocols that we now use in Kenya to save the northern white rhino were developed thanks to a collaboration between scientists and European zoos. The results from Hodenhagen are very promising and show that research that helps animals in human care can be beneficial even for saving species in their wild environment. We believe that experience and knowledge gained through work with southern white rhino females in European zoos will lead to a successful pregnancy with the pure northern white rhino embryo in Kenya in the foreseeable future.
Name
— Jan Stejskal
Position
Director of Communication and International Projects
Boilerplates